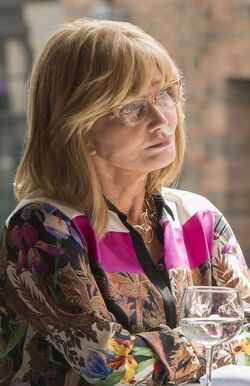 Dorothy Walker is a talent agent, who used to live in a one bedroom apartment before turning her daughter Patricia into the child star Patsy Walker. She constantly exploited "Patsy"'s rentability, going as far as performing sexual favors to awards comittees to ensure she won, and was abusive to the point of physical damage to her daughter. This lead Patricia into a life of drugs and misadventure, and to further improve Patsy's image and avoid bad press, Dorothy adopted Jessica Jones, a girl who went to the same school as Trish and was orphaned in a car crash. Unknown to Dorothy, the accident gave Jones superstrength, until she found out as Dorothy forced her daughter to vomit in the toilet, calling her "Fatsy", until Jones intervened by throwing Dorothy out the bathroom. The sisters, with Patricia now known as "Trish", parted ways and did not speak to Dorothy for a long time.

Dorothy is notably greedy and manipulative.

Like this? Let us know!
Retrieved from "https://marvel.fandom.com/wiki/Dorothy_Walker_(Earth-199999)?oldid=5049485"
Community content is available under CC-BY-SA unless otherwise noted.