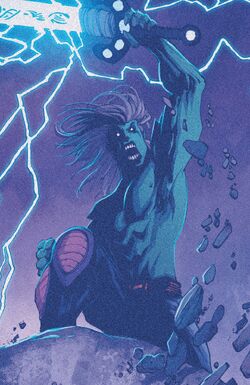 Dorrek Supreme was the name of the first Skrull/Kree hybrid. He was born to Skrull war-queen Ryga'a and Kree ultra-warrior Soh-Larr, two generals of each opposing side during the first Kree-Skrull war. His parents romanced in the battlefield, and eloped.

When he grew up, Dorrek Supreme started gathering others like him, and formed the Knights of the Infinite. The objective of Dorrek was to shape this group of outcasts into heroes dedicated to uniting the two warring empires.

At some point in time Dorrek Supreme died, because many generations later, the modern iteration of the Knights of the Infinite followed a prophecy which involved the person who would be believed to be the reincarnation of Dorrek Supreme.[1]

Like this? Let us know!
Retrieved from "https://marvel.fandom.com/wiki/Dorrek_Supreme_(Earth-616)?oldid=6129731"
Community content is available under CC-BY-SA unless otherwise noted.