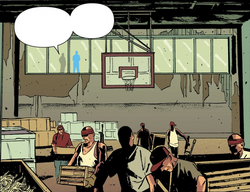 The Dos Soles Cartel was the largest and strongest gang in the Americas,[1] the most powerful gang in history.[2] At the peak of its power, when it brought America's street gangs under its banner, it was an organization with hundreds of thousands of members in the United States.[3] Their major source of income was the trade in illegal drugs and they were also involved in gun running.[2]

A conspiracy within the U.S. Government hired Dos Soles to create a wave of terror and street crime in the cities of the United States of America. Those within the conspiracy did not like the fact that super powered costumed heroes and violent vigilantes were whom the public looked to, and planned to use the anarchy and terror caused by Dos Soles to get the citizens to turn to the federal government and its armed forces for security and order.[4]

To achieve this, Mr. Secretary supplied Dos Soles with chemical weapons which were to be used in Los Angeles,[4] and sent the black ops team Howling Commandos to stop the Punisher.[5] A.I.M provided Dos Soles with the services of Electro,[6] then sent Domino as additional backup.[7]

Guillermo Del Sol attempted to release the poison gas in Los Angeles, but the weapons were destroyed during the Punisher's assault on the Dos Soles warehouse in Los Angeles.[8] He came to Los Angeles with the objective of causing death and destruction, and getting the cartels and gangs to follow the Dos Soles Cartel in forming a national gang. Electro caused a citywide blackout resulting in Del Sol attacking the police throughout the city.[9]. While being pursued by the Punisher, a UAV took him out before he was captured by the Punisher.[5]

Afterwards his brother, Hector Del Sol, arrived in Los Angeles to finish the job. Dos Soles armed the gangs which went on a spree of murder, burning, and looting in Los Angeles,[2] which ended in the bombing of several high-rise buildings in the city.[3] Unlike his brother, he did not plan to lead a national gang formed by the cartels and gangs. He knew that the gangs could not be controlled, and therefore saw his job as unleashing the gangs to rampage in the cities and to empty the prisons of hardened criminals.[10] After Punisher discovered and revealed the government conspiracy, Hector Del Sol attempted to flee back to Mexico, but was intercepted by the Punisher who then executed him live on television to send a message to criminals and terrorists.[11]

Retrieved from "https://marvel.fandom.com/wiki/Dos_Soles_Cartel_(Earth-616)?oldid=5580145"
Community content is available under CC-BY-SA unless otherwise noted.