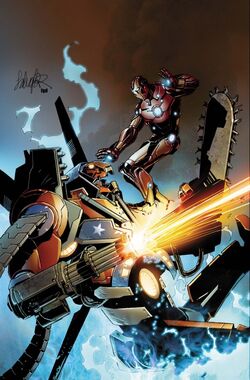 A former Army soldier working for the Hammer Industries. Doug Johnson served as the pilot wearing the Detroit Steel armor.[1]

Johnson almost met his demise at the hands of Mokk, Breaker of Faith in the streets of Paris, France, when he tried to battle the villain and was turned to stone,[2] but after Odin restored every petrified person's life, he returned as well, but to his family, the US army and Hammer Industries, was still KIA. [3]

He managed to recover his passport and return to America, where he stalked Sasha Hammer and attacked her nights later stating that he was no longer Doug Johnson but Detroit Steel. After kidnapping Sasha, he used her to get the Detroit Steel Armor back to him, Justine Hammer accepted the pact, with the intention to activate self-destruction remotely, but as Johnson hacked Hammer's systems days before, it had no effect on him. [4]

Sasha and the Steel Corps battled Johnson until she used her whips to decapicitate Johnson inside his armor.[5]

Mostly from the Detroit Steel armor he piloted

Skilled in piloting and combat fighting

Weapons within the armor

Like this? Let us know!
Retrieved from "https://marvel.fandom.com/wiki/Doug_Johnson_III_(Earth-616)?oldid=5198209"
Community content is available under CC-BY-SA unless otherwise noted.