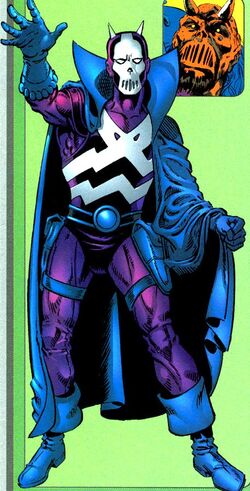 How gratifying it is to have you -- the greatest living dinosaur -- subjugated in my service!

Dr. Douglas Birely was born in Culver City, California. As a scientist, he was studying the correlation between radioactivity and mutation when he was contaminated by a radioactive spill.

As Doctor Demonicus, he was a criminal geneticist who created monsters and discovered the Lifestone. As a former ally of Maur-Kon, who gave Demonicus his satellite headquarters, he created numerous immense monsters including Batragon, Ghilaron, Lepirax, and Centipor to create the Monster Menagerie. They were killed by Godzilla. He later used Starchild, Cerberus, and the Hand of Five.

Exposure to the Lifestone fragments eventually mutated Birely so that his face became a twisted mirror of his mask. He changed tactics and began mutating humans instead of animals, giving them superpowers as his team of super-villains, the Pacific Overlords. Demonicus and the Overlords battled the Avengers and won, raising a sub-oceanic landmass to the surface as an island nation, recognized as Demonica by the United Nations for its mineral wealth and trade possibilities.[1]

However, the raised island also contained the temple of the lost demon, Rakasha. Birely was enslaved to the demon's will, and soon the Pacific Overlords fell under its sway as well. In a second encounter with the Avengers, Demonica was destabilized as Birely attempted to make sacrifices to the demon. He was seemingly killed when Demonica sunk into the Pacific.[2]

Doctor Demonicus was eventually arrested, convicted and incarcerated for his crimes. He was sentenced to "the Raft", a supervillain prison facility. He was among the 43 villains that escaped during the breakout engineered by Electro.[3]

A blaster that fires an unknown form of concussive energy

Like this? Let us know!
Retrieved from "https://marvel.fandom.com/wiki/Douglas_Birely_(Earth-616)?oldid=6501038"
Community content is available under CC-BY-SA unless otherwise noted.