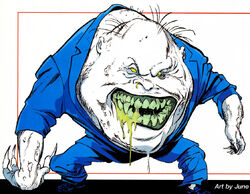 Douglas M. Carmody was in charge of the Carmody Research labs where Dr. James Power was working to perfect his anti-matter power generator. When the alien race of Kymellians destroyed the anti-matter generator (which also led to the creation of four young heroes known collectively as Power Pack,) Carmody lost his position, blaming the children of Power Pack.[2]

Carmody went on to hunt the Pack, whom he considered mutants.[3] To this end, he stole a powerful battlesuit from the government energy research station, Project Pegasus, and called himself the Bogeyman. He later fought the Warriors Three of Asgard as well as the mutant students known as the New Mutants in his attempt to kill the Power Pack.[4]

During a demonic invasion of New York City, N'astirh took several people and turned them into demons against their will and Carmody was one of these.[5] Although most of these returned to human form later, Carmody was already so insane and demon-like before his transformation that his transformation became permanent. In his new form, Carmody tried once again to kill Power Pack and kidnapped their parents, but when he saw his new image in a window, he became irrational, jumping off a building.[6]

After being transformed into a demon, Carmody's body was more fluidic; he could easily become a liquid and move through cracks. He could also take significant damage; his body would just accept the impact. His strength level was also enhanced. His fingers are now more like claws.

Before being transformed into a demon, Carmody used a battlesuit that gave him the ability to fly, moderately enhanced strength and durability. He also used "trash bags" which were made of a material that prevented anyone within from using their powers.

Like this? Let us know!
Retrieved from "https://marvel.fandom.com/wiki/Douglas_Carmody_(Earth-616)?oldid=6507119"
Community content is available under CC-BY-SA unless otherwise noted.