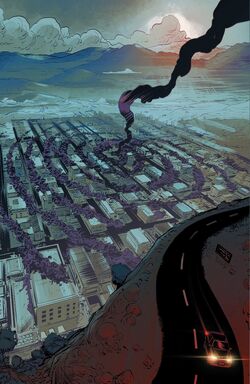 Doverton was a peaceful small city in Colorado, with its main points of interest being the zoo and Ralsby Meat Packing Plant, which provided work for most of the citizens. The city's fortunes took a turn for the worst, however, when the symbiote-augmented serial killer Carnage arrived. Attacking the meat-packing plant to gorge the Carnage symbiote on beef and workers unfortunate enough to not escape in time, Kasady sent the symbiote through the water mains and took over most of the town's inhabitants, with the intent of using it as a base to conquer the world. Four days later, a superhero task force comprised of Spider-Man, Captain America, Wolverine, Hawkeye, and the Thing were dispatched to take Carnage down; which ended disastrously when all of them except Spider-Man were taken over by the Carnage symbiote.[1]

Spider-Man was rescued by police officer Eric Morrell, whose wife and children had been taken over by Carnage, and was taken to a resistance based at Ralsby's private estate. The government dispatched the newly-formed Mercury Team and Scorn, while Captain America broke free of Carnage's control long enough to call in Agent Venom.[2] Scorn was able to build a sonic weapon that separated Kasady and the infected citizens from the Carnage symbiote. Captain America called in a localized napalm strike to annihilate the majority of the Carnage symbiote, the remainder of which was collected by Scorn, and life in Doverton mostly returned to normal.[3]

Some time later, Carnage returned to Doverton alongside Shriek and Doppelganger, converting the Last Chance Church into a temple for the Cult of Knull. Carnage used the remnants of his symbiote left inside the citizens of Doverton to convert them to his cult and ultimately sacrificed them to the dark god Knull, leaving the city in ruins.[4]

Doverton formerly had a population of roughly 1146, but after Carnage's return they were all killed.

Like this? Let us know!
Retrieved from "https://marvel.fandom.com/wiki/Doverton?oldid=6030384"
Community content is available under CC-BY-SA unless otherwise noted.