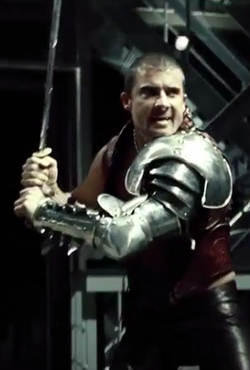 Dagon was the progenitor of the Vampire race, Homines nocturnae. He terrorized humankind from the first moments of its history, spreading his cursed blood all over the world. According to legend, he was born around the 5th or 4th millennium BCE in the "cradle of civilization" of ancient Sumer, Mesopotamia. He was worshipped by the Babylonians as "Dagon", and as the centuries passed, he eventually became known as "Dracula". Dracula later became disgusted with the world and retreated to a tomb in Iraq to sleep through the coming ages.

From the 16th century onwards, the myths regarding Dracula filtered through Western culture, leading Bram Stoker to write the famous novel bearing his name in 1897. In the 20th century, the mythical version of Dracula entered popular culture in the form of various motion pictures and comic books.

Searching for help in their fight with the vampire hunter Blade, Danica Talos and Asher Talos found Drake's 4,000-year-old tomb in the Syrian Desert, and awakened him. After consuming dozens of humans in order to regain his strength and powers, Drake was informed by Danica on the situation of the vampire kind and on Blade, and, disgusted by their weakness, accepted to hunt down and kill the Daywalker.

Drake, immune to the effects of sunlight, exited from Talos's base and saw all the changes the world had gone through in the millennia he was asleep. Mocked and accidentally humiliated by two shop owners, who tried to sell him a Dracula-shaped vibrator, Drake killed them both, and then headed for Edgar Vance's office. Once there, Drake killed the familiar and waited for Blade's arrival with the shape of the psychiatrist. Blade arrived along with Abigail Whistler and Hannibal King. After discovering Vance's corpse, the trio attacked Drake, but he easily incapacitated King. While Abigail took care of Hannibal, Blade followed Drake who was escaping on the rooftops. Drake told Blade he felt affinity with him, since they're both "honorable warriors", and challenged him to a regular duel. After making a distraction with a baby he held hostage, Drake fled.

Some days later, when Blade and Abigail were out on hunt, Drake arrived at the Nightstalkers base with the shape of Abraham Whistler. In here, he killed all the Nightstalkers, with the sole exceptions of Hannibal King, who was taken to Danica for an interrogation, and Zoe, Sommerfield's little daughter, who Drake wanted to convert to a vampire. When Blade arrived at Talos' place, Drake was awaiting him. The two engaged in a sword fight, during which they proved to be equal. Enjoying the fight, Drake assumed his real shape, a towering demon whose powers were far superior to Blade's. Just a moment before he finished Blade, Abigail tried to kill Drake with an arrow charged with the Daystar Virus, a biological weapon created to kill all vampires once mixed with Drake's blood. Drake's reflexes were too sharp, and he grabed the arrow in mid air, roaring at the girl and leaving it falling on the ground. Blade understood the opportunity, grabed the arrow and stabed Drake's flank with it, releasing the Daystar which killed all nearby vampires. Before death, Drake praised his enemy for his skills and honor, telling him that, as long as Blade was alive, there was future for the vampire race. He then granted Blade a "parting gift".

When FBI agents Ray Cumberland and Wilson Hale arrived, they found Blade's corpse and took him to the morgue. They soon found out that the body was in reality Drake's, who transformed so that Blade had the time to escape, thus making a final praise to his enemy.[1]

Drake shared common superhuman abilities with the the rest of the Vampire race, but, being the progenitor, is more powerful. He was born perfect and had no need to evolve.

Like this? Let us know!
Retrieved from "https://marvel.fandom.com/wiki/Dracula_(Earth-26320)?oldid=6059965"
Community content is available under CC-BY-SA unless otherwise noted.