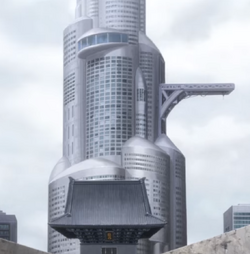 The Dragon Palace was a skyscraper located in the Hightown area of Madripoor.

The skyscraper belonged to the Kurohagi Family. The first known owner was Juō Kurohagi, and after his death it was inherited by his son Hideki. The Dragon Palace stood at the highest point on the island. On the back side it was protected by a steep cliff, and the only entrance at the front side was through the infamous Hell Road, making the palace difficult to attack for any of the gangs occupying Madripoor.[1]

Kurohagi and others who wanted to visit the palace always arrived by plane, but any unidentified helicopters or aircraft were immediately attacked.[1]. The palace was further guarded by Vadhaka.[2] But as a contingency plan in case the palace should ever be invaded by a hostile force, Hideki Kurohagi had the whole palace rigged with explosives that he could detonate from a bunker underneath the palace. He detonated them in a last attempt to stop Logan from reaching Mariko.[3]

Like this? Let us know!
Retrieved from "https://marvel.fandom.com/wiki/Dragon_Palace?oldid=6435539"
Community content is available under CC-BY-SA unless otherwise noted.