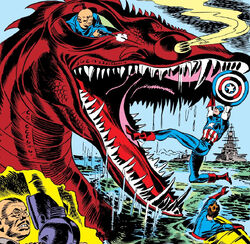 The "Dragon of Death" was a massive submarine fashioned after a giant sea-monster built by Imperial Japan during World War II. It was piloted by Captain Okada and stationed in the Pacific near Honolulu, Hawaii. Part of their mission was to capture any U.S. Navy ships to gather information on an American military outpost on Kuona Island. Their plan was to set off the inactive volcano on the island and destroy the base. They captured the U.S. Destroy the "Whinfield" and attempt to torture Commander Phillips to get information. When Phillips refused to talk, they captured his daughter and threaten to torture her instead.

Phillips' capture brought Captain America and Bucky to their rescue. Captain America freed Phillips and his daughter then destroyed a barge loaded with TNT from setting off the volcano. Believing Cap to have died in the explosion, Bucky furiously use ship cannons to sink the Dragon of Death; however, Cap turned up alive and well.[1]

The Dragon of Death was salvaged by the United States military but was later stolen by Hydra and used as their base during their earliest operations in the late 40s. It was destroyed during a fight with the Invaders.[2]

The Dragon of Death was a massive submarine which could dive and travel below water. Its depth range is unknown. Its massive size could allow it to carry an unspecified amount of troops as well as store large Destroyer class ships inside its interior. Its massive "dragon's head" could rend ships apart or "swallow" them for capture.

The Dragon of Death was armed with torpedoes and side mounted cannons.

The Dragon of Death had a communications system, radar, and para-scope as well as other features that were common in conventional submarine.

Like this? Let us know!
Retrieved from "https://marvel.fandom.com/wiki/Dragon_of_Death?oldid=6433682"
Community content is available under CC-BY-SA unless otherwise noted.