Dragon of the Moon 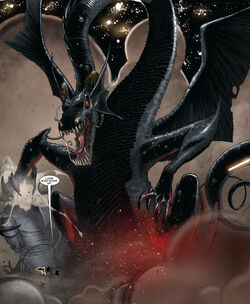 The sole survivor of an ancient race of demons, the Dragon of the Moon seeks to gain power by corrupting the human race. The Dragon once allied with Mordred who was trying to overthrow King Arthur of Britain, but it was defeated and imprisoned within Saturn's moon Titan by the Eternals.[1]

The Dragon has claimed responsibility for corrupting Thanos, who murdered most of the population of Titan and, a generation earlier, for the civil war amongst Uranos' followers that decimated Titan before Mentor and Sui-San repopulated it. The Dragon is a liar, however, and its claims have not been supported otherwise.[2]

The Dragon of the Moon began to corrupt Heather Douglas, an Earth girl living and studying on Titan. The Dragon allowed Heather to believe she had defeated it in spiritual combat, while secretly taking up residence in her mind. This allowed the Dragon to subtly cultivate Heather's arrogance and corruption for many years, even as she took the name Moondragon.[3] Moondragon ultimately succumbed fully to the Dragon of the Moon's influence. Thanks to the Defenders, both Heather and the Dragon were seemingly destroyed.[1]

During Phyla-Vell's quest to find the Kree savior, Moondragon began suffering from the same headaches that signaled the coming of the Dragon of the Moon. Eventually. in battle with the Phalanx and near death, she succumbed to the Dragon and was transformed into its likeness.[4] She later died at Ultron's hands and dissolved into nothingness.[5]

A year later, in the realm of Oblivion, the Dragon was holding Moondragon in its gullet. Phyla and Drax the Destroyer, sent by Mentor, attempted to rescue Moondragon, but Maelstrom intended to feed them to the Dragon. The former went first but the timely arrival of Quasar prevented Drax from being consumed as well. Just before the Dragon could consume them both, Phyla, having become the new Avatar of Death, destroyed the Dragon to free Moondragon. The Dragon then turned into a flock of bats.[6]

Like this? Let us know!
Retrieved from "https://marvel.fandom.com/wiki/Dragon_of_the_Moon_(Earth-616)?oldid=6501040"
Community content is available under CC-BY-SA unless otherwise noted.