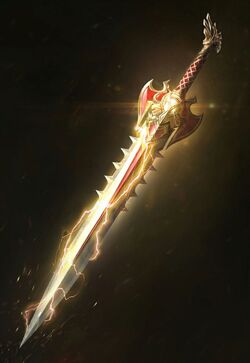 A wizard named Kahji-Da was said to have carved this nearly-indestructible sword from the tusk of an extradimensional dragon. The sword was passed into the possession of the Ancient One, who in turn gave it to his disciple Doctor Strange. Strange gave the sword to the Valkyrie after she returned the Ebony Blade to Dane Whitman.[1]

The Lady Sif also picked up Dragonfang during Ragnarök, after Valkyrie fell in battle.[2]

After the costly battle for Midgard during the War of the Realms event, Brunnhilde fell in battle against the instigator of said conflict: Malekith the Accursed.[3] A great many weapons from across the Ten Realms were left scattered across New York City, Dragonfang included.[4] The sword was picked up by the sociopathic super mercenary Bullseye after dispatching Gold Rush of the Fast Five crew with said blade edge while intercepting him to get it.[4]

He put its killing bite to good use by cutting down Heimdall with the mighty blade while contracted to kill the new Valkyrie. Showcasing a host of deadly new skills with the blade, Jane was left no choice but to destroy the sword before Lester could murder more people with it.[5]

Retrieved from "https://marvel.fandom.com/wiki/Dragonfang?oldid=5811566"
Community content is available under CC-BY-SA unless otherwise noted.