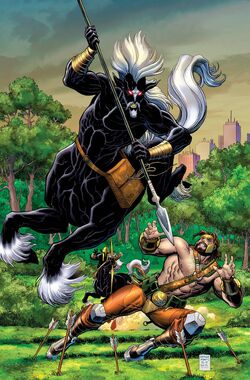 Drassus was a Kentauros of Greek Legend, and the last Hipparch of the Kentauros. He and his herd traveled to Earth to find the Oracle. While walking through Central Park; Hercules was confronted by the Centaurs.[1] They battled the demigod, and as they started firing arrows at him and nearly hitting nearby civilians; Hercules had enough of the battle and pulled out a Earthly firearm. They agree to a truce and they explain that they are only on Earth to learn of the "Uprising Storm". Hercules agreed to help them and they left him with an aulos, an instrument, to summon them.[2] They later returned just in time to fire arrows at Catastrophobia saving Hercules. Catastrophobia escaped and the Centaurs decided to lay low until the next battle.[3] Hercules welcomed to Centuars to stay at his apartment building they helped with dinner.[4]

Like this? Let us know!
Retrieved from "https://marvel.fandom.com/wiki/Drassus_(Earth-616)?oldid=4330229"
Community content is available under CC-BY-SA unless otherwise noted.