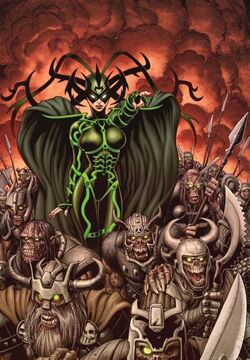 Draugr are the undead army of Hel and Guardians of Nastrond, who previously served the Goddess Hela, the Death Queen and Mistress of Darkness, and now serve King Balder.[1]

With the final incursion drawing near, King Loki made a deal with Hela and Tyr to unleash the resurrected Midgard Serpent, in an attempt to destroy Midgard and thereby save the universe.[3]

To this end, the Draugr attacked Asgardia; however, Jormungand was defeated when Freyja, the All-Mother, sacrificed her own life to banish it back to Hel.

Reinforced by the Frost Giants of Jotunheim and the Kingdom of Rock Trolls, the Draugr continued to press the attack against the Asgardians,[4] but were ultimately defeated when Odin used the Gjallerhorn to summon the fallen Asgardian heroes of the past to be reborn and return to fight in the new Ragnarök.[5]

Land of Fire and Ice

In the wake of Thor Odinson's disappearance, S.H.I.E.L.D. looked to handle the growing menace from Asgard's most dangerous foes, who were marching on Midgard in his absence.

The Avengers pushed back against the ancient forces beginning with Enchantress and the Wrecking Crew. They next confronted Malekith, Kurse, and the Dark Elves, before the arrival of Ymir and the Frost Giants.

Finally, the true threats were revealed, as dead and defeated brutes, warriors, and Vikings emerged at the beck and call of the power-hungry coalition led by Hela at the behest of Surtur. The Draugr army of terrifying Hræzla, disgraced Rekkr, and dishonorable Flotnar were eventually banished back to Hel by Beta Ray Bill who joined the Alliance.[6]

The Draugr returned to Midgard sometime later when a coven consisting of Hela, Umar, and Morgan le Fay hatched a plot in the Dark Dimension. Alongside Malekith, Dormammu, and Dracula, the witches hoped to harness the powers of Baron Mordo in order to forge a bridge to Otherworld. They dispatched Vampires, Draugr, Dark Elves, and Mindless Ones to London to pave the way, but were thwarted by the combined efforts of Blade, newcomer Spitfire, and Doctor Strange, who convinced Baron Mordo to join the Alliance instead.[6]

Like this? Let us know!
Retrieved from "https://marvel.fandom.com/wiki/Draugr_(Race)?oldid=6510029"
Community content is available under CC-BY-SA unless otherwise noted.