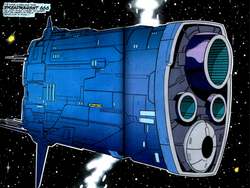 A powerful battleship created by Thanos to help him conquer the universe. At the time he believed that he needed power for his objective, but as he learned to be subtle, the Dreadnaught-666 was abandoned until he required it during the Infinity Crusade. He needed the ship to fight through the followers of the Goddess on his way toward the planet, Paradise Omega.[2]

Upon reaching the planet, he fired the main frontal energy weapons which were powerful enough to punch through the Goddess-powered force field and thereby vaporizing part of the world's surface but was unsuccessful in stopping the Goddess. The energy backlash from the force field (or the Goddess) appeared to have destroyed the ship.[3]

The battleship is also seen in Earth-91119.[citation needed]

Like this? Let us know!
Retrieved from "https://marvel.fandom.com/wiki/Dreadnaught-666?oldid=6538718"
Community content is available under CC-BY-SA unless otherwise noted.