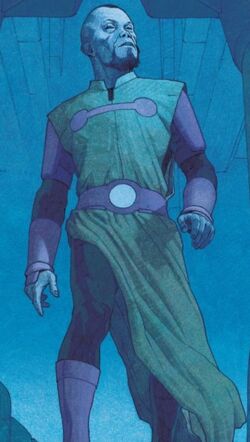 Druig, Lord of Flames and Nightmares, was the Polarian Eternal son of Valkin, and cousin to Ikaris. A power hungry schemer, Druig was a disappointment to his father, who nevertheless turned a blind eye to Druig's faults.[5]

One thousand years ago, in preparation for the Third Host of Celestials, Druig worked with Valkin, Ajak, and his uncle Virako in preparing sites for the Celestials' arrival. During the preparations, Druig snuck away and attempted to seize power from the entombed Deviant Mutate known as Dromedan, but ended up unleashing him. Thor, God of Thunder, and the Eternals succeeded in beating Dromedan, but at the cost of Virako's life. Valkin vouched for his son, who claimed innocent intent in his actions, but also adopted his nephew Ikaris (Virako's now orphaned son) as his own.[6] The close relationship between Ikaris and Valkin only further soured Druig's relationship with his father.[7]

In modern times, Druig served as an agent of the KGB in Russia, and found that he enjoyed torturing people. When Ziran the Tester came through Polaria, Druig planned to slay him using "the Weapon", which he had learned of by torturing his cousin Ikaris, but Ikaris disintegrated Druig before he could fire the Weapon.[8]

His body was then recovered by the Celestials, and put into everlasting containment at the Desecration Annex. His container was even breached during a battle between Godstalker and Genis-Vell.[9]

After Sprite's trickery reduced the Eternals to humans, Druig became deputy Prime Minister of Vorozheika under the name "Ivan Druig". Druig hired Sersi to organize a party at the Vorozheikan embassy, asking her to invite wealthy guests and prominent scientists, ostensibly to promote tourism to their Soviet splinter nation. He then arranged for armed men to storm the party, kidnap the scientists and manufacture a hostage situation. However, one of Druig's co-conspirators turned against him and ordered the mercenaries to murder Druig as well as the hostages once the scientists were away.[10]

In addition to Sersi, Thena Eliot (one of the scientists) and Mark Curry (Makkari, Sersi's date) were also Eternals present at the party. Their close proximity and the stress of the situation created a minor "Uni-Mind", starting to awaken their powers. While Makkari dealt with the gunmen at super-speed, Druig experienced a reawakening of his mental powers, and his ambitions.

Returning to Vorozheika, Druig seized control of an army unit and then rounded up all heads of the government. He then had all the people involved in the betrayal at the embassy dragged before him and the government heads, and gave the heads a choice. They either kill a betrayer, or kill themselves. After one government head tried killing Druig, he forced the man to kill himself. With this small but bloody revolution, Druig took control of Vorozheika.[11]

As the other Eternals began to awaken, Zuras needed Druig's help containing the Dreaming Celestial. In exchange for his assistance, Druig extracted a vow from Zuras to leave Vorozheika to him and his rule. Zuras reluctantly agreed.[12]

With the Dreaming Celestial contained, an "arms race" began between Zuras and Druig's people to locate other Eternals. Druig found that he could brainwash Eternals to his cause during the process of reawakening their true selves, and soon established nearly a dozen followers.[13]

When Ikaris grew tired of allowing Druig to roam free, he abdicated any ties to Olympia (and Zuras's edict) and attacked Vorozheika. Ikaris battled Druig and his corrupted Eternals alone, then led them into battle with his allies in San Francisco, the X-Men.[14] Ultimately, Druig and all the Eternals joined forces to counter the threat from space known as the Horde.[15]

As an Eternal of Earth, Druig is descendant from the original Eternals created by the Celestials and further empowered by Kronos's experiments with the cosmic life-force.

Like this? Let us know!
Retrieved from "https://marvel.fandom.com/wiki/Druig_(Earth-616)?oldid=6465440"
Community content is available under CC-BY-SA unless otherwise noted.