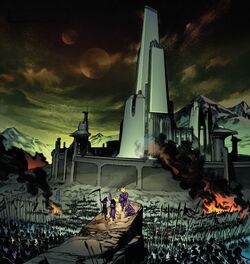 As we have told you, Dryador is no more. In belongs to Arakko. The first of many such conconquests.

The Fiefdom of Amenth (formerly the Kingdom of Dryador) was one of the provinces of the Foul Courts in Otherworld.[1]

The Kingdom of Dryador was one of the five realms of the Foul Court under the rule of Merlin. Once known as the Kingdom of the Seventy Seas, since the arrival of First Horsemen and their demon army from Amenth through the Dryador Rift, Dryador has been literally burned by the fires of war and it's ocean have been boiled.[2][1]

After conquering the Last Watchtower of Del Di'Lorr, the First Horsemen annexed Dryador making it a province of Arakko. With their siblings Death and War actively participating as swordbearers in Saturnyne's tournament of champions, Famine and Pestilence are the current acting regents of the Fiefdom of Amenth.[1]

Like this? Let us know!
Retrieved from "https://marvel.fandom.com/wiki/Dryador?oldid=5795856"
Community content is available under CC-BY-SA unless otherwise noted.