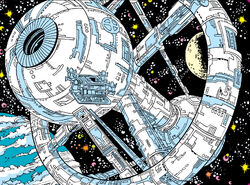 Dry Dock is the original Federation Starship-Yard and training facility of the Solar System before the Badoon invasion in the 31st century.

During the Badoon attack, the commanders used the experimental warp drive to try and save the station. While it successfully transported the station, the drive was not yet completed and emitted radiation, killing the entire crew. As the central computer of the ship was designed to aide and take orders from people, it simulated it's own crew while remaining in a stationary orbit. But the leader of this crew, a simulated Jovian named Hollis-12, would grow insane over time.

When the Guardians of the Galaxy found Dry Dock, they were taken hostage by Hollis-12, who planned to clone them to make an army of companions for himself. Charlie-27 was able to survive all of Dry Dock's internal security systems and traps, destroying the main computer.[1]

After the computer was repaired, Dry Dock became the traveling space station of the Guardians of the Galaxy.

Like this? Let us know!
Retrieved from "https://marvel.fandom.com/wiki/Drydock?oldid=6434309"
Community content is available under CC-BY-SA unless otherwise noted.