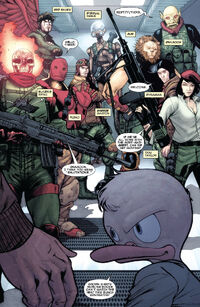 A special ops combat team assembled by A.R.M.O.R. to stop the zombies of Earth-12591. The Dozen were recruited by Howard the Duck and were mostly comprised of golden-age era superhumans, many of whom hadn't been seen in action for decades, in addition to Battlestar and a skeptical Dum-Dum Dugan.

The unit was transported to the zombies' Earth through the trans-dimensional teleportation powers of group member Taxi Taylor and were attacked by large cannons firing zombies at them immediately upon arrival. Team member Gur was quickly killed and the group's ship was destroyed in the initial battle, leaving the remaining members stranded on the ground.[1]

The Dozen suffered their next casualties when they were attacked by a zombified version of the Invaders. Breeze Barton, Dynaman and the Red Raven were all killed by the superpowered zombies before the group was rescued by the Suffragists, the last resistance to the zombified Third Reich left on the planet. The Suffragists took the surviving members of the Ducky Dozen to meet their informant, Professor Zog, who revealed that he himself was a Nazi, but that he didn't agree with the Reich's plan to Zombify the Multiverse. Zog arranged transport for the group aboard his personal train in order to get them inside the Zombies' headquarters, where they kept the trans-dimensional battleship.[2] Soon Zog himself, as well as the Suffragist Columbia were killed by zombie Valkyries that attacked the train looking for Loki.

After the Valkyries themselves were driven off, Loki appeared to the remaining adventurers.[3] He revealed that he was behind the planet's zombie apocalypse, but that he didn't intend for the Asgardians to also become infected with the plague. With Loki's help, the group managed to avoid the Asgardian zombies who were looking for Loki. Dum Dum was then disguised as his zombie self and snuck into the zombies' secret headquarters. The rest of the group end up fighting the Asgardian zombies while the Eternal Brain used his telekinetic powers to pick the secret entrance's lock. Dragoon was killed by a zombie Executioner before the group was able to seal themselves inside the hideout.[4]

The group suffered more casualties once inside the base, however, as Flexo, the Blazing Skull and Libertas were all torn limb from limb by a zombified Toothgnasher and Toothgrinder while the others escaped. The rest, including Loki, headed to a secret bunker containing countless powerful weapons that the zombies had horded during their world takeover. They succeeded in launching an atomic bomb that wiped out the zombie threat, though it cost Miss America her life. The remaining Dozen and the Riveter were able to escape thanks to the selfless sacrifice of the Eternal Brain, who gave Taxi Taylor the time she needed to transport them back to the Hollow at the cost of his own life. Unbeknownst to the group, they also brought a zombified Captain America back to Earth-616.[5]

Retrieved from "https://marvel.fandom.com/wiki/Ducky_Dozen_(Earth-616)?oldid=5546348"
Community content is available under CC-BY-SA unless otherwise noted.