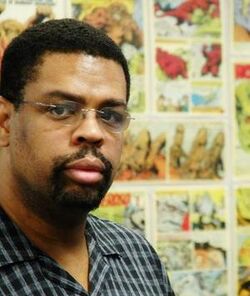 Worked as a writer and editor for Marvel, where he co-created Damage Control. He also worked for DC and several other companies. He founded Milestone Media, a comic publishing company founded and run by minorities and focusing on minority superheroes, and also worked on the animated series, Static Shock (based on the Milestone superhero, Static), Justice League, Justice League Unlimited, and Ben 10.
He later died on February 22, 2011 from complications following heart surgery.

Like this? Let us know!
Retrieved from "https://marvel.fandom.com/wiki/Dwayne_McDuffie?oldid=6841989"
Community content is available under CC-BY-SA unless otherwise noted.