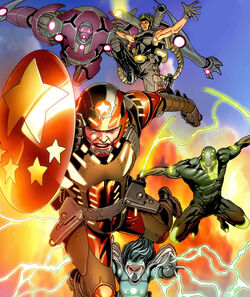 When Mandarin sent a wave of Dreadnoughts to destroy the Three Gorges Dam in China, Iron Man went to help, and he found the help of The Dynasty, the new group of militarized Chinese superheroes.

Among their ranks are The Star, Weather Witch, Saber, Soldier One and The Revolutionary, depicted by Iron Man as a "sort of a militarized Avengers from what we've been able to ascertain". Also, they apparently only work in his country.

The Chinese army decided to use jets to explode the Dam, so although they would lose it anyway, they could at least destroy the enemy. Then the Dynasty left the scene in a special aircraft.[1]

When Tony Stark was kidnapped by the Mandarin and forced to create new weapons for him, the Dynasty was contacted by Tony's friends Pepper Potts and Bethany Cabe of Resilient for help to rescue Tony which they gladly accepted.[2] The cavalry arrived just in time when Iron Man was fighting Mandarin and his Titanomechs, which were destroyed by the efforts of the heroes.[3]

The Dynasty fought Thanos' forces during his invasion. The Star and Soldier One died in battle. Following the loss of their leader, the Dynasty disbanded. The Weather Witch and Saber would be part of the Ascendants.[4]

The Dynasty appears to the be successors of the other Chinese superhero teams China Force and People's Defense Force.

Like this? Let us know!
Retrieved from "https://marvel.fandom.com/wiki/Dynasty_(Earth-616)?oldid=5546353"
Community content is available under CC-BY-SA unless otherwise noted.