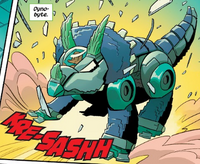 Origin
Designed and built by Moon Girl to protect her body when her consciousness is in the body of Devil Dinosaur.

While Moon Girl's consciousness was in the body of Devil Dinosaur, his consciousness was placed within her body, making it appear as if Lunella had become feral, a situation which she spent months attempting to mitigate by working on a top-secret project, culminating in the development of the Dyno-byte Prototype.

Created in Moon Girl's Secret Laboratory, the cybernetic ceratopsid could be summoned to Lunella's location via a wrist watch control device and functioned as an exoskeleton to shelter her body while it interfaced with an artificial nervous system that was programmed to mimic the mutant Devil-Beast's anatomic mechanics. It was further augmented with a flamethrower to imitate fiery breath.

Unfortunately the prototype was also built primarily from parts scavenged from Public School 20 Anna Silver's FIRSTⓇ LEGOⓇ League competition and thus was smashed apart when it collided with Kid Kree during a battle against General Pad-Varr of the Kree Empire at the Jacob K. Javits Convention Center.[1]

Retrieved from "https://marvel.fandom.com/wiki/Dyno-byte_Prototype?oldid=5332033"
Community content is available under CC-BY-SA unless otherwise noted.