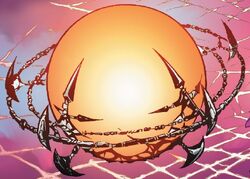 E.V.A. isn't a vehicle. She's my partner. She's my mutation.

E.V.A. was grown in the body of the man known as Fantomex. She was a physical manifestation of his nervous system and hadn't gained sentience. At this time, resembled a sentient techno-organic ship with insect-like legs for landing. E.V.A. could fly and generate electrical charges as a weapon.[3]

E.V.A. helped X-Force whilst Fantomex was a member.[4] When he was killed by Skinless Man, she saved Psylocke, and then mutated into a humanoid form.[5] After Fantomex was resurrected, he was separated into three distinct bodies for each of his three brains. E.V.A. retained the ability to assume her humanoid form as well as her spaceship form for a time.[6] The full effect of Fantomex's separation on E.V.A. wasn't clear. She initially sided with Fantomex and Cluster against Weapon XIII.[7]

When Fantomex lost track of Cluster and became part of Cable's X-Force team, E.V.A. came with him.[8] However, the instability that affected Fantomex after his tri-separation apparently impacted E.V.A. as well. When Fantomex's hardwired self-confidence was contradicted by the mistakes he made in reality, he began to suffer a mental breakdown. E.V.A. helped "fix" him by suggesting he murder everyone who appeared "better" than him, so that by default he would be "the best" again.[1]

Fantomex was eventually stopped when Hope Summers implanted into his mind the thought that in order to be perfect, a person needed inadequacies and personal faults. Fantomex couldn't comprehend being perfect through imperfection and suffered a mental break down, having E.V.A purge him of all flaws afflicting him along with his almighty attributes. Psylocke then used her psychic blades to scramble his brains seemingly clipping his connection to E.V.A.[9] When Fantomex was restored to normalcy by Magneto,[10] E.V.A. was also returned to her previous form.[11]

Some time after their neruo-psychic link was reestablished, E.V.A would assist Magneto's faction of X-Men to waylay the Inhumans when the mutant radical decides the future seer Ulysses is too dangerous to be left in their care.[12] Later again assisting Fantomex in the X-Men's conflict with the denizens of New Attilan in an attempt to dispose of the Terrigen Cloud covering the globe.[13]

X and the Weapon + Program

Fantomex would willingly chose to forfeit his physical body to the wayward consciousness of Charles Xavier while he himself lived a fantasy like life within the astral plane.[14]

X's occupation of her old hosts form would free the symbiotic entity from it's moorings; said hosting organism taking off at an unknown time. She would only turn up again in damaged form to deliver a prerecorded message of it's now deceased partner to Captain America and Wolverine, both advocates of the Weapon Plus initiative.[15]

Flight: E.V.A. can propel herself and fly through the air at great speeds.

Scanning Replication: Working in conjunction with his Cybernetic Brains, E.V.A can analyze and copy any manner of information be it chemical or genetic in origin, and transfer it into binary coding for Fantomex to use and re-purpose for his benefit.

Neuroweapons System: Fantomex can user her as a form of bio-mechanical arsenal, either flinging pieces of it/her like high velocity darts or E.V.A herself discharging electrostatic blasts that can stun and immobilize.

Illusions: Together, with Fantomex, they could create extremely convincing illusions.

Regeneration: Can regenerate any part of her body should it be lost in battle.

Like this? Let us know!
Retrieved from "https://marvel.fandom.com/wiki/E.V.A._(Earth-616)?oldid=5628089"
Community content is available under CC-BY-SA unless otherwise noted.