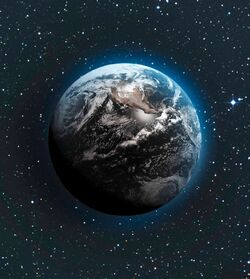 What you fail to understand about Earth... nnph... is that we will fight to the end. We will use every weapon at our command. And if those fail -- we will use yours!

Earth is a rocky planet orbiting the Sun, and the third planet in order from the star it orbits.

Earth-616 has all the features of our reality: same countries, same personalities (politicians, movie stars, etc.), same historical events (World War II, 9/11, etc.), and so on. However, it also contains new ones, such as countries like Wakanda, Genosha, and Krakoa, and organizations like the espionage agency, S.H.I.E.L.D. and its enemy, Hydra.

Midgard as it known to the Asgardians is one of the Ten Realms and exists on the middle level of the World Tree along with Jotunheim. Midgard is represented in the Congress of Worlds by a single human senator.[20] Bill Cobb and Jane Foster have both represented their homeworld on the council.[21]

right|thumb|Origin of Life Earth is the third planet of the Sol system. It has one moon. It is sometimes referred to as the world or Midgard. Sometimes, it is called by its Latin name, Terra or Tellus.

The Hydrogen gases of the Big Bang formed galaxies, then suns, then planets, among them Earth.[22] It seems that the Sun, Earth and the Moon were all originated from the fragments of Gigantus.[23]

Just after its creation, the Ethereal Energy of Life spawned Demiurge, who seeded the planet with its energies, creating the Elder Gods.[24]

Many continents eventually formed, including Gondwanaland and Laurasia.[25]

After half a billion years,[25] 4 billion years ago,[26][27] the formation of "building block of life" from waters stirred by volcanic heat and lightning's pulse led to the primordial cell, who divided in two cells, one of them (That Which Endures) modifying his genetic pattern and both reassembling, before splintering again and spreading that change into all descendant of that first organism,[25][26] manifesting its intellect in random creatures every 100,000 years, transferring itself from species to species in order to remain in the fittest host-species.[27]

Million of years later (500 million years ago), diversity of life began to manifest itself,[25] with fish.[26] Those new forms of organic life were watched over by Gaea who became life's protector.[24]

Eventually, Gaea and Which That Endures decided to let the Dinosaurs fade in profit for those mammals.[26][28] Set refused that, and sent his Dinosaurs to try to eradicate the mammals, but was countered by Atum.[28]

The tradition of using costumed secret identities to fight (or commit) evil had long existed in this world (for example, with the medieval Black Knight), but it came into prominence during the days of the American 'Wild West' with heroes such as the Phantom Rider. During the 20th Century, the tradition was reinvigorated, first by Captain America in the 40's (not the first costumed hero of the time, but the most influential) and then by Spider-Man in modern times.

Earth's major heroes (the ones who get involved in most of the important events) are the Amazing Spider-Man, the Invincible Iron Man, Doctor Strange, Sorcerer Supreme, Daredevil, Black Panther, the Mighty Thor, the Incredible Hulk, the Fantastic Four, S.H.I.E.L.D.’s director Nick Fury, and Captain America. The Avengers and the X-Men are also major players, although the memberships of both groups have often changed. The Avengers have included most of Earth's major heroes as members at one time or another. The X-Men consists of various mutants, such as Wolverine, brought together by Professor X. Dr. Strange has often formed an ad-hoc team of heroes called The Defenders to help him deal with major menaces to the world, often including the Hulk, the Sub-Mariner, the Silver Surfer, and various other heroes.

Of course, as one would expect in a universe with superheroes, there would inevitably have to be crime and evil, and this universe is by far no exception. Arguably the most dastardly and dreaded villain in Earth-616 by far would have to be Victor Von Doom, the dreaded Doctor Doom, archenemy of the Fantastic Four. He has the record of most heroes fought, having fought nearly every hero on Earth. Other major villains include Magnus, the mutant master of magnetism known as Magneto and the mutant overlord Apocalypse, archenemies of the X-Men, corrupt businessman Norman Osborn, the megalomaniacal Green Goblin, Doctor Otto Octavius, a.k.a. Doctor Octopus, and Eddie Brock, once the venomous Venom, all of whom are the top archenemies of Spider-Man, Victor Creed, Sabretooth, archenemy of Wolverine, Wilson Fisk, the Kingpin of Crime, archenemy of Daredevil, Samuel Sterns, the Leader, and Emil Blonsky, the gamma-irradiated monster the Abomination, archenemies of the incredible Hulk, the Dreaded Dormammu and Baron Mordo, archenemies of Doctor Strange, the Nazi Fascist Red Skull, archenemy of Captain America, the trickster god Loki, archenemy of Thor, the Mandarin, archenemy of Iron Man, Kang the Conqueror and Ultron, archenemies of the Avengers, and Mephisto, archenemy of Ghost Rider and the Silver Surfer.

A degree of paranoid fear against mutants exists due to stories of mutants being a race or even a species (Homo superior or Homo sapiens superior) that is evolving and is meant to replace normal humans. This has caused organizations to form to deal with the problem, who can be divided into three camps: those who seek peaceful coexistence between mutants and normal humans (the X-Men and their affiliated groups), those who seek to control or eliminate humans to give mutants safety or dominance (Magneto and his followers, as well as other mutants such as Apocalypse), and those who seek to regulate or eliminate mutants in favor of humans. The latter often use the robots known as Sentinels as weapons.

Most of the superhumans owe their powers to the Celestials, cosmic entities who visited Earth one million years ago and experimented on our prehistoric ancestors (a process they also carried out on several other planets). This resulted in the creation of two hidden races, the godlike Eternals and the genetically unstable Deviants, in addition to giving some humans an "x-factor" in their genes, which sometimes activates naturally, resulting in sometimes superpowered, sometimes disfigured individuals called mutants. Others require other factors (such as radiation) for their powers to come forth. With the exception of psionic abilities, these powers are usually random; rarely do two people have the exact same set of powers. It is not clear why the Celestials did this, although it is known that they continue to observe humanity's evolution.[30] The majority of the public is unaware of what may cause superhuman powers.

Other common origins for superhuman powers include magic, genetic manipulation, or bionic implants. Some heroes and villains have no powers at all but depend instead on hand-to-hand combat training or advanced technological equipment. Technology is slightly more advanced than in our world due to unique individuals of genius intelligence, such as Reed Richards, (Mister Fantastic) of the Fantastic Four, Tony Stark, the Invincible Iron Man, Bruce Banner, the Incredible Hulk, and Doctor Doom. However, most of the really advanced devices (such as powered armor and death rays) are too expensive for the common citizen, and are usually in the hands of government organizations like S.H.I.E.L.D., or powerful criminal organizations like the Maggia, A.I.M., and Hydra. One major company producing these devices is Stark International, owned by Anthony Stark (Iron Man) but there are others. Advanced technology has also been given to humans by hidden races, aliens, or time travelers like Kang the Conqueror, who is known to have influenced the robotics industry in the past.

Most of the current generation of gods have been revealed to be the descendants of the Elder Goddess Gaea. The two most prominent pantheons are the Asgardians (of whom Thor is a member) and the Olympians (of whom Hercules is a member). The lords of the various pantheons sometimes gather in groups known as the Council of Godheads and Council of Skyfathers.

Retrieved from "https://marvel.fandom.com/wiki/Earth?oldid=6510030"
Community content is available under CC-BY-SA unless otherwise noted.