Home to Jim Jaspers and Furies 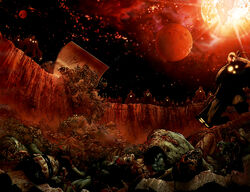 The heroes of this world were all killed by The Furies, except for the mutant Jim Jaspers who escape to Earth-11024 using his powers.[1]

A six-squad of Furies followed him using a Ghost Box and ended up in Earth-11024 where they were killed. The authorities of this reality then send six thousands Furies, and turned this world as a "wet rock".[2]

They also sent another six-squad on Jaspers' trail and ended on Earth-616, in Mbangawi, where the X-Men and the Doctor Crocodile who killed all of us except one, lured by Emma Frost to believe that his mission was a success. He then go back home through the Ghost Box.[3]

Like this? Let us know!
Retrieved from "https://marvel.fandom.com/wiki/Earth-10083?oldid=4427249"
Community content is available under CC-BY-SA unless otherwise noted.