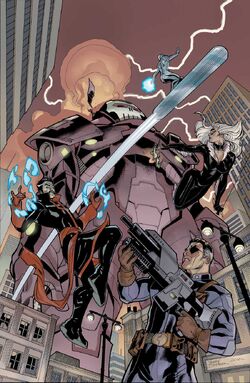 Stephen Strange first had a vision of his Earth-11127 future when he probed the mind of "Notebooks Joe" Mitchell, a Greenwich Village eccentric who had gone mad after a discovering a mysterious machine while on an archaeological dig in Africa decades earlier.[1] Two or three weeks later, Strange had a one-night stand with Molly, a student who visited him to consult a book on occult architecture. Both of them regretted the incident and resolved not to see each other again.[2]

Earth-11127's divergence from Earth-616 occurs the following day. Sitting in a diner, a depressed Strange attempts divination by dropping liquid from a teabag onto a newspaper. The letters spell out the word RAGE.[2] That evening, the Hulk arrives at the Sanctum Sanctorum requesting Strange's help: Nul, Breaker of Worlds, is loose and could destroy reality.[2][3] Strange recruits his old Defenders team-mates Namor and the Silver Surfer, along with Red She-Hulk and Danny Rand, and heads to Wundagore Mountain, where they believe Nul was heading.[2] There they discover a Concordance Engine, a machine capable of erasing time and space.[4] Strange takes it back to New York for investigation, where he inadvertently uses it to bring into existence a dead lover from his past. Meanwhile, Namor discovers another Engine buried under the ocean.[5] The second Engine appears to have been used to power the 19th-century submarine Nautilus, which was found impaling the body of the sea-god Pontus from pre-history. They realise the Engines can also be used to travel through time.[6]

The Defenders notice that whenever they try to tell others about the Engines, they are lost for words. Danny Rand and the Surfer find accounts of the Nautilus and the Engine in the records of Orson Randall's Confederates of the Curious. The Confederates fought over the Engines with another group of adventurers incluidng Namor's parents, Captain Nemo, and John Aman, the Prince of Orphans. Danny comments that both these groups of prototype super-heroes are remarkably unknown to history, and wonders whether the Concordance Engines can hide themselves by obscuring the mind's perception of them. Aman is now killing the Immortal Weapons whom he believes are threatening the Engines, and Danny resolves to shut them down.[7] Another group, the Council of Antiquarians, employ the Black Cat to obtain the third of King Solomon's Frogs which form another Concordance Engine, but are killed by Aman, who has also killed T'Challa of Wakanda.[8] The Defenders, having failed to contact Nick Fury of SHIELD, kidnap the Fury of an alternate 1968 in the hope he may have answers.[9]

Returning to their own time, the Defenders meet Ant-Man, who tells them that Nul is destroying the world.[10] During what seems like a near-death experience, the Silver Surfer learns from the Omega Council that the Concordance Engines were placed on Earth to protect it from the Death Celestials, mad gods who rampage across universes, obliterating them as they go. The Prince of Orphans explains that by moving the Engine from Wundagore and prying into its secrets, the Defenders have unwittingly sabotaged their universe's defences.[11] Doctor Strange travels back in time to try and avert their actions, but the remaining Defenders accept their fate as their universe is destroyed by Nul.[12]

Back in Earth-616, Doctor Strange witnesses his past self's encounter with Molly and realises the chain of events leading to the end of the world were started by Hulk's visit to him the following evening. When Earth-616 Strange is in the diner trying divination with a teabag and a newspaper, Earth-11127 Strange manages to guide the drops of tea so they spell out GIRL, before returning to his death in his own time. As a result, Earth-616 Strange changes his mind about Molly and goes to meet her that evening, so is not in when the Hulk comes by asking for help. Hulk is sent away by Wong, the Defenders are not reformed, the Concordance Engines remain undisturbed, and the universe continues in existence.[12]

Like this? Let us know!
Retrieved from "https://marvel.fandom.com/wiki/Earth-11127?oldid=6096399"
Community content is available under CC-BY-SA unless otherwise noted.