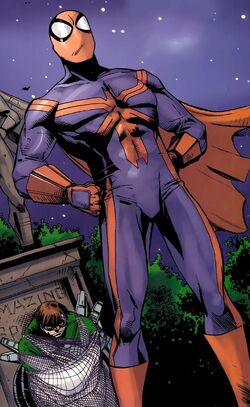 This has got to be the worst alternate universe ever.

—The Amazing Spider of Earth-616[src]

A seemingly perfect world where Peter Parker (known in this reality as The Amazing Spider), is rich, popular and powerful with none of his loved ones having died.

Peter is close to his Uncle Ben, who constantly spurs him to be the best he can be. When Peter's corporation develops a portal to other Earths, Ben pushes him to abduct the Spider-men from those worlds to absorb their life forces in order to increase his own powers - rendering the vast majority of this world's villains defeated and heroes retired due to superfluousness.

Here, Bruce Banner magically banished the Hulk to Hell and took over from Stephen Strange to become the Sorcerer Supreme; Wade Wilson is not Deadpool, but instead goes by Death Mask - the last known remaining and most powerful supervillain. This universe was visited by the Spider-Man, Deadpool and Hulk of Earth-616 who went some way toward helping Peter Parker regain his humanity.

Like this? Let us know!
Retrieved from "https://marvel.fandom.com/wiki/Earth-11638?oldid=4404299"
Community content is available under CC-BY-SA unless otherwise noted.