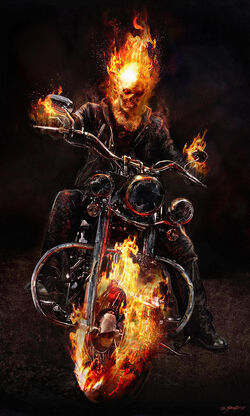 Origin of the Ghost Rider's Curse

Zarathos was once an angel of God and the Spirit of Justice whose purpose was to protect man. He was later tricked and taken to hell where he was tortured to the point of insanity. He became a twisted version of his former self, acting on extreme measures of punishing anyone who has done wicked deeds, no matter what they where. He became the Spirit of Vengence and the operative of the devil. The devil uses the spirit of Zarathos to empower certain individuals with his power to become the Ghost Rider.

The Legend of San Venganza

In the American Old West, Mephistopheles sends Carter Slade, his bounty hunter of the damned known as the original Ghost Rider, to retrieve a contract for a thousand corrupt souls from the town of San Venganza. Because such a large amount of souls would cause Hell on Earth, the Rider refuses to give the contract and escapes Mephistopheles, later to hide the contract and himself from the devil.

Johnny Blaze once made a deal with Mephisto to cure his father's cancer. At the beginning, it worked but he later died in a bike crash while the demon laugh at his death. Realizing that Mephisto tricked him, he leaves everything behind, including his love interest, Roxanne. Years later, Johnny Blaze became a stunt rider and meets Roxanne again, now a journalist, and makes a dinner date with her that evening.

However, Mephistopheles' son, Blackheart, comes to Earth to find the lost contract and use it's power to overcome his father. To ensure himself allies, he enlists the fallen angels known as the Hidden, a trio of demon spirits who represent three of the four elements — the water-demon Wallow, the earth-demon Gressil, and the air-demon Abigor. Because of this, Mephisto makes Johnny the new Ghost Rider, promising his soul back for defeating Blackheart. Johnny couldn't meet Roxanne in their date for experiencing his first transformation, and, at the same night, defeated Gressil.

The following day, Johnny meets a caretaker and tried to explain Roxanne the situation before he could leave the town. The following night, johnny killed Abigor, but Blackheart and Wallow realized johnny's weakness, Roxanne.

After the caretaker, who turned out to be a Ghost Rider himself, gave Johnny the pact of San Venganza, he transformed himself and the two of them were going after Blackheart. However, he revealed he could turn only one last time and that was it, leaving Johnny to face Blackheart alone. After Johnny killed Wallow, he defeated Blackheart in his legion form (possessing the souls of San Venganza) with the help of Roxanne using the Penance Stare, now that Blackheart possessed a lot of souls.

Sending the devil's son back to hell, Mephisto offered Johnny's souls back, but the rider decided to keep the curse to use his own power against him. The devil swore to make him pay before go away with Blackheart's body. Johnny and Roxanne share words and a kiss at a tree marked to symbolize their relationship, whereupon Johnny rides away.[1]

In this movie, Johnny was approached by Moreau, who offers to lift the curse of the Rider from him if he helps him find the half-human son of the Devil, Danny Ketch, before Mephisto can transfer his essence into the boy's body. He accepts the deal. Ray Carrigan is hired to find the boy while Nadya, the boy's mother, does this as well.

Ray was empowered by the devil after both Johnny and Nadia retrieved Danny. After Johnny got rid of the curse, Ray killed all the monks, that were attempting to kill Danny for his link with the devil. Nadya, Moreau and Johnny, the only survivors, stopped Mephisto to transfer his mind within Danny's body, but Moreau was killed.

Danny gave back Johnny's powers when the rider was captured, but passed out. The Ghost Rider was assisted by Nadya. In the run, he killed Ray and sented Mephisto back to hell. This act of revenge allowed Zarathos to come back to his angelic form, but when inside of Johnny's body, instead of the traditional Ghost Rider, he would become a blue-flamed one, representing his change of character.

Being now able to manipulate the angelic energy of the Ghost Rider, Johnny healed Danny who was almost dying. Apparently, Johnny and Zarathos will be bounded with each other permanently so they both can protect mankind together as the Ghost Rider.[2]

Like this? Let us know!
Retrieved from "https://marvel.fandom.com/wiki/Earth-121347?oldid=6104055"
Community content is available under CC-BY-SA unless otherwise noted.