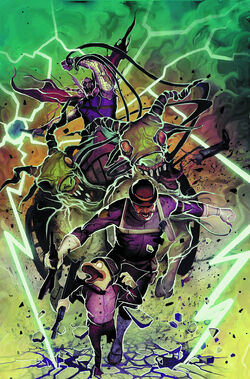 A universe where the Nazis won World War II by becoming zombies. Now that they have taken over the world, they want to expand their reach and take over all other realities.

A.R.M.O.R. agent Howard the Duck had put together the Ducky Dozen, which included Dum-Dum Dugan and several Golden Age heroes, to stop them. But shortly after they entered the reality, their plane was shot down and many of the Golden-Age teammates were killed in the process. On enemy territory, they now face the zombified Invaders.[1]

Like this? Let us know!
Retrieved from "https://marvel.fandom.com/wiki/Earth-12591?oldid=4516717"
Community content is available under CC-BY-SA unless otherwise noted.