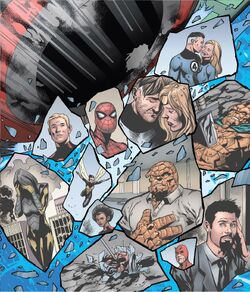 A pocket reality, A.I.M. created this sliver in the time-space continuum in which allowed them to alter certain events so they can obtain the technology and science from various individuals. They did this by exploiting the fluid nature of time brought on by the manipulations of Kang traveling back to alter the past.[1] This "universe" does not extend beyond the outer reaches of the solar system,[2] the perimeter started contracting with the arrival of the Dark Avengers, first passing Neptune, it went past Uranus a few hours later[3] and soon crossed the asteroid belt.[3]

Various changes were made to the history of Earth, where New York City has become the last bastion of human civilization on the planet.[4] However it is divided among various factions controlled by versions of Earth's heroes.[1] The Fantastic Four were further enhanced by a second influx of Cosmic radiation.[5]

With the end of this reality time folded back into itself, with any living participants remembering it at most as a bad dream.[1]

Like this? Let us know!
Retrieved from "https://marvel.fandom.com/wiki/Earth-13584?oldid=5502107"
Community content is available under CC-BY-SA unless otherwise noted.