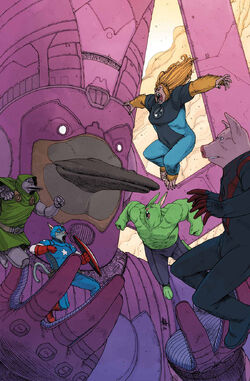 A universe similar to Earth-1610, where anthropomorphic animal super-heroes existed instead of humans.

According to Spider-Ham, the world was a dark and brooding place where species fought each other until the long-lost hero Captain Americat returned, beginning the Marvel Age, and the rise of super-heroes.

This reality began to decay as a consequence of rifts in the space-time continuum. As the rifts got worse, Ducktor Doom came up with a plan to remake the universe at the expense of billions of lives. While initially reluctant, the Invisible Gorilla agreed to join forces with him. The plan failed, and this universe perished.

Its only survivor, Spider-Ham, traveled through the Multiverse in order to warn the inhabitants of different realities about the upcoming doom prevent those universes from suffering the same fate as his.[1]

Like this? Let us know!
Retrieved from "https://marvel.fandom.com/wiki/Earth-14094?oldid=5594385"
Community content is available under CC-BY-SA unless otherwise noted.