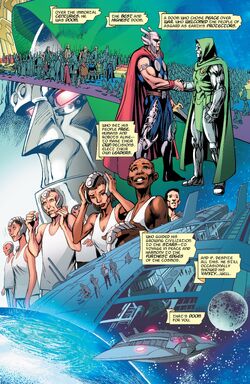 In the year 2420, the finest version of Ultron appeared and conquered the world, enslaving most of humankind and acquiring Odin's power.

The fomerly heroic Avenger Doombot gathered a group of heroes from across time and enlisted them to defeat Ultron,[1] while keeping a secret the fact he planned to take Ultron's place after the evil A.I.'s fall.[1]

After Ultron's defeat and having taken his place as conqueror of the world, Doombot was convinced by the Vision to reject his tyrannic programming and free humankind, ultimately guiding humans to prosperity.[2]

Like this? Let us know!
Retrieved from "https://marvel.fandom.com/wiki/Earth-14831?oldid=5857942"
Community content is available under CC-BY-SA unless otherwise noted.