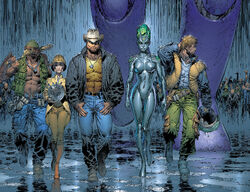 Divergent timeline after the Magneto impersonator destroyed most of New York, and Jean Grey was killed in the process. Scott Summers retired, leaving the Xavier institute in Beast's hands. Unfortunately, Beast turned to the performance-enhancing drug Hypercortisone D (street named "Kick"). The drug was later revealed to be the aerosol form of the sentient bacteria Sublime. With McCoy under its control, Sublime set out to destroy not only humanity and mutantkind, but all the new species that rose in the following one hundred and fifty years.[1]

Like this? Let us know!
Retrieved from "https://marvel.fandom.com/wiki/Earth-15104?oldid=5293242"
Community content is available under CC-BY-SA unless otherwise noted.