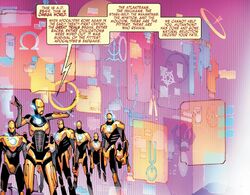 This is A.D. 3167. This is Omega World. When Apocalypse rose again in the early twenty-first century, The Great Trials began. Entire races, entire civilizations were wiped out. It was survival of the fittest. Apocalypse's endgame. The Atlanteans, the Inhumans, the Stark-Self, the Wakandans, the Mystics, and the Moloids. These are the fittest. These are who remain.

Reality in which the Omega World existed.[1]

Like this? Let us know!
Retrieved from "https://marvel.fandom.com/wiki/Earth-16558?oldid=5174892"
Community content is available under CC-BY-SA unless otherwise noted.