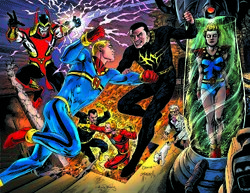 In 1948, a Qys spaceship crashed Wiltshire, England. Dr. Emil Gargunza used its technology to turn a trio of orphans into superhumans. By speaking their keywords, Micky Moran, Dicky Dauntless and Johnny Bates could transform into the Miracleman Family. Gargunza controlled them by inducing a dream-sate where they shared adventures as Miracleman, Young Miracleman and Kid Miracleman.

By 1963, the British government deemed the Miracleman and Gargunza's Project Zarathustra too great a threat. Gargunza fled to Paraguay, concealing his covert creation of Miraclewoman and Young Nastyman.An atomic strike was launched launched on the Miracleman Family. Young Miracleman was killed. Kid Miracleman escaped to live on as a superhuman and was corrupted by his power. Miracleman reverted back to Micky Moran and grew to middle age with no memory of his life as Miracleman.

In 1982, Moran's memory returned. As Miracleman, he fathered a superhuman child, Winter, and uncovered the truth about his past. Gargunza attempted to possess Winter and was killed by Miracleman. The Qys returned to Earth seeking to exterminate those created from their misappropriated technology. Winter's existence as a new form of "intelligent life" stayed their hand. Miraclewoman convinced the Qys and their enemies, the Warpsmiths, to use Earth as a place for détente and the joining of their cultures.

In 1985, Kid Miracleman attacked London, killing thousands. Miracleman and his companions were revealed in the ensuing battle. From London's ashes arose Miracleman's towering pyramid, Olympus, and a new world. It is a world free of War, of Famine, of Poverty. It is 1993. It is the Golden Age. There are its people tales...

Like this? Let us know!
Retrieved from "https://marvel.fandom.com/wiki/Earth-18?oldid=6135635"
Community content is available under CC-BY-SA unless otherwise noted.