The Rider raised Thanos as his child 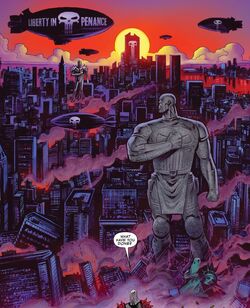 When the Rider took a baby Thanos to raise him good, he inadvertently created a reality where Thanos tried to bring good to Earth by becoming a dictator and banished those who didn't follow him to ghettos. When the future Thanos showed the Rider the world he created, the Rider realized his mistake. So, he killed the future Thanos and returned the baby Thanos to the past so the dystopian timeline didn't come to pass.[1]

Like this? Let us know!
Retrieved from "https://marvel.fandom.com/wiki/Earth-18138?oldid=5735699"
Community content is available under CC-BY-SA unless otherwise noted.