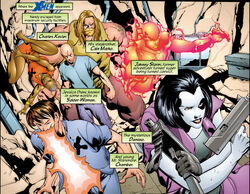 Earth-1815 is a universe very similar to that of Earth-616 where the major divergence point happened on a particular point on the planet Earth. This reality is home to a group of Elders of the Universe. Some of the oldest beings in the universe, who have lived exceedingly long lives focusing on a particular obsession. Known Elders in this reality are the Grandmaster, Runner, Collector, Gardener and Champion. When the Collector and Grandmaster discovered the planet Earth and its super-human population, they both had their own intentions for that world. The Collector sought to gather these super-humans, however the Grandmaster proposed a bet: He bet that the humans' ignorance and fear of those with super-human power would lead to the ultimate incarceration of super powered beings[1].

The Grandmaster's bet began to work in his favor, thanks in part to an accident caused by the insectoid Timebreakers whose tampering with the Panoptichron (a fortress in the nexus of all realities) caused the timeline of Earth-1815 to shift for the worse, one of many potential damage to the multiverse that threatened to destroy all existence. [2] In this altered history, the human race began Operation: Zero Tolerance against any super-human beings. By the modern age of Earth-1815 all super-humans were either exterminated or imprisoned. [3].

In order to develop the technology to detain or eliminate super-humans, the masterminds behind Zero Tolerance had the aid of mutant technologist Forge who gladly sold out his super-human brethren for his own freedom. Opposition came from two spectrum's, the mad Charles Xavier who fought violently against his human oppressors, and Magneto who fought for peaceful co-existence between both sides. Both men and their followers were ultimately neutralized and imprisoned[4].

To correct this damage to Reality-1815, the Timebreakers gathered together the Exiles, mutant heroes from different realities to fix the damage done. However, the Timebreakers only provided the Exiles with a cryptic order to "find their greatest leader", leading them to believe their mission was to find Charles Xavier. Learning of the maximum security facility where Xavier was being held, the Exiles freed him from the prison unaware that in this reality he was consumed with hatred. Freed from the machines that negated his powers, the evil Xavier read the Exiles' minds and found their cause foolish, knocking them out with a psi-bolt before heading off to get revenge against the world that imprisoned him[3].

Xavier's first show of power was to mind wipe everyone in within a five mile radius of downtown Phoenix, Arizona. Xavier then freed like-minded super-humans from one of the maximum security prisons to be his team of revenging X-Men. Their members included Xavier's step-brother the Juggernaut, the Human Torch, Domino, Spider Woman and Chamber. They attacked the New York Stock Exchange. Meanwhile, the Exiles tracked down Forge and learned the location of Magneto. The team was split in two, with one half going to stop the evil X-Men, while the other would free Magneto. The group fighting the X-Men easily subdued the terrorists, however the Exile's Mimic was forced to slay Xavier. Meanwhile, the other half of the team learned that the humans had rigged the prison containing Magneto with a nuclear bomb. The Exiles' Magnus sacrificed his life by using his magnetic powers to free everyone trapped inside and sealing up the prison to shield them from the nuclear explosion. With the majority of the super-human population freed, the Exiles explained to Magneto why they had freed him and they were soon teleported away to their next mission, leaving Magneto to try and make his world a better place[4].

The Exile's mission in Earth-1815 spoiled the Grandmasters bet with the Collector, earning the elder's anger because he hated losing. Confronting Magneto, he learned all about the Exiles and decided to get revenge against them. He scoured the multiverse finding a reality where exact duplicates of the original Exiles existed. He found these conditions on Earth-33629. He then dealt with the Grandmaster of that reality to let him gather a group of Exiles from that reality and pit them against the current incarnation of the group, which by then had gone through many changes. Grandmaster-1815 then posed as the Timebroker and gathered that reality's Exiles and tricked their reality hopping counterparts to discover and investigate them. Although the two groups clashed, and the Exiles of Earth-33629 gained the upper hand and captured most of the other team, they all learned the truth. Not liking being manipulated, both teams confronted Grandmaster-1815, who revealed their plans to them. When they refused to participate in his challenge he angrily slew them all. This earned the anger of the Elders of Earth-33692 who resurrected all the slain heroes. They sent the reality hopping Exiles back to Panoptichron and allowed the super-humans of Earth-33692 to beak Grandmaster-1815 into submission before he was imprisoned by The Collector[1].

Not much is known about the history of Earth-1815's age of heroes. It can be presumed that it mirrors that of Earth-616. The point of divergence is truly unknown, and that absolute history of it's various super-humans remains unrecorded.

Like this? Let us know!
Retrieved from "https://marvel.fandom.com/wiki/Earth-1815?oldid=4640417"
Community content is available under CC-BY-SA unless otherwise noted.