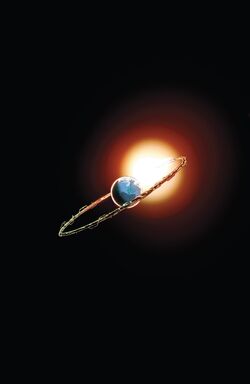 In this reality, The Thing was unceremoniously killed by Galactus when the world devourer first arrived to Earth. The grief prevented Mister Fantastic from driving Galactus away. Instead, Doctor Doom stepped in and used a machine to take over Galactus' body, and swore he would never succumb to devouring the Earth. Mister Fantastic was heavily affected by this series of events and disappeared for years.

In an attempt to escape from the destruction of their homeworld (most likely at Doom's hands), the Skrulls carried out a mass exodus and infiltrated humanity, replacing a million people before being found out. The superhero community rallied together against the invaders, and in the process fell under the jurisdiction of S.H.I.E.L.D., with Sue Storm heading up the organization's superhuman division. The captured Skrulls were imprisoned at the Nega-Prison in the Negative Zone.

Roughly a decade after Doom had taken over Galactus, he had kept his promise. And while he didn't devour the Earth, he consumed everything else in the universe.[1] The retired Silver Surfer gave the Human Torch his Power Cosmic so that he could become the Earth's artificial Sun.[2] Reed Richards returned shortly after the Skrull invasion was thwarted, and worked non-stop to "make things better" and make up for having failed all those years earlier.[1]

This reality was accidentally visited by The Thing and the Human Torch of the Prime Marvel Universe while searching for their universe's Reed Richards.[1] Doom sensed the arrival of the visiting heroes, but deduced incorrectly that the perforation in the fabric of the reality was caused by Reed attempting to find a way out of the universe. He sent his Heralds of Doom to attack the Earth and announce his arrival. Reed was inspired to stop Doom, and he even found an unlikely ally in the Victor von Doom from The Thing and the Human Torch's universe, who had followed them and offered help in stopping his counterpart.[3] Together wtih Victor, Reed built a machine that Emma Frost used to swap minds with Doom. Before she transferred her mind, Reed planted an overriding instruction to rewrite Galactus' nature, turning Emma into a force of universal restoration instead of destruction, a Lifebringer that started navigating and rebuilding the universe.[2]

Despite the tragedy that befell the Fantastic Four, Earth's heroes actually thrived in this reality, since several deceased heroes in the Prime Marvel Universe appear alive and well.

Like this? Let us know!
Retrieved from "https://marvel.fandom.com/wiki/Earth-18466?oldid=6125616"
Community content is available under CC-BY-SA unless otherwise noted.