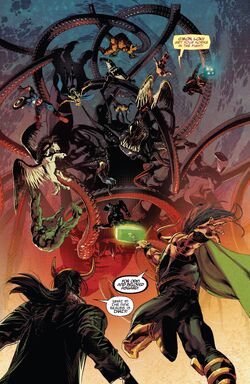 After the Multiverse was re-ordered, the Reality Stone of each reality became displaced to an adjacent reality. This universe's Reality Stone appeared on Earth-616 and it was retrieved by Phyla-Vell from the Collector.[5]

During a battle against Devondra for the fate of the universe, Loki Odinson got knocked through the barriers of reality and landed on Earth-616, where he stumbled into his counterpart, Loki Laufeyson, who was investigating the God Quarry. After pointing out the differences between himself and his counterpart, Odinson opened a portal to return to his world and continued fighting Devondra.[3]

Some time later, Requiem killed Loki and took the Infinity Stones in his possession, save for the Reality Stone which was hidden by Phyla-Vell and Moondragon. The two heroines failed to stop Requiem, and in the process Requiem learned the location of the final stone. With the destruction of their universe imminent, Moondragon escaped with Phyla-Vell to Earth-616.[4]

Like this? Let us know!
Retrieved from "https://marvel.fandom.com/wiki/Earth-18897?oldid=5794086"
Community content is available under CC-BY-SA unless otherwise noted.