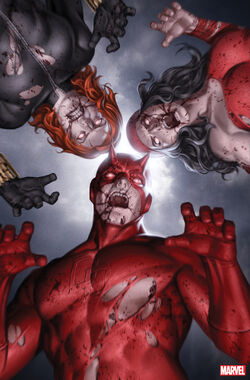 Little is known about this reality's history, but it would appear to be mostly identical to that of Earth-616, with one major difference: the Brood had found the corpse of Galactus, and planted their eggs in him; the resulting fusion giving birth to a species of sub-microbial parasites that shared a collective consciousness called the Hunger Cosmic. This parasite could infect people, turning them into zombie-like creatures known as The Respawned.[1]

From there, the Respawned proceeded to devour whole galaxies, and eventually, a large group of the Respawned made its way to the edge of Earth's Solar System, using Galactus' zombified corpse as transport. Then Captain Marvel, having been turned into one of the Respawned, sent out a distress signal at Galactus' coordinates, luring a team of Avengers, X-Men, and the Fantastic Four to investigate.

When this team arrived, they were ambushed by Captain Marvel and the large horde of Respawned, whose members included Groot, Gamora, Silver Surfer, Nova, and Gladiator. The ensuing battle resulted in the infection or death of the whole team[2] (except for Wolverine)[1] at the hands of the Respawned.[2]

Following the battle, the Galactus Hive made its way to Earth with the Respawned, and the Hunger Cosmic spread to the general population as well as metahumans.[3] By the time of the invasion of New York City, a small resistance of heroes and villains had formed underground,[4] while S.H.I.E.L.D. and A.I.M. had formed a coalition with the goal of stopping the Respawned, and fought the Galactus Hive in New York.[2]

At one point, the S.H.I.E.L.D.-A.I.M. coalition tried to use non-organic beings and robots as soldiers against the Respawned --known as Ennows-- since they couldn't be turned by the Hunger Cosmic. They also designed a strain of the Transmode Virus to infect human survivors and protect them from zombification, although this would result in their loss of humanity.[5]

The coalition also built Space Arks, which are implied to have successfully left Earth, and at the same time, rehabbed Atlantis into a colony for air-breathers, the latter of which was proven unsuccessful as the Respawned managed to invade and infect seemingly all of Atlantis.[1]

Eventually, communications went down (presumably along with the coalition) as the planet was decimated and the general population fell to zero. Following this, the Ennows began fighting for themselves, establishing a fortified city known as the Phalanx Wall and clashing with the Respawned for dominance of the planet. Meanwhile, the Respawned started to gather themselves in Limbo (now known as Blackspring) with the Galactus Hive, aiming to invade the rest of the Multiverse once they had consumed all of Earth's metahumans.[6]

Following the Galactus Hive's destruction, it is implied that the Queen of the Hunger Cosmic has discovered what has transpired on Earth, and is coming to the planet.[4]

Like this? Let us know!
Retrieved from "https://marvel.fandom.com/wiki/Earth-19121?oldid=7031681"
Community content is available under CC-BY-SA unless otherwise noted.