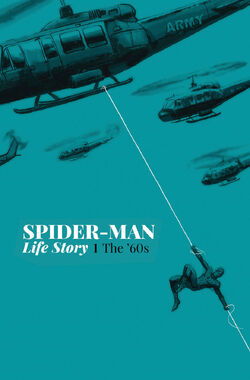 On this Earth, Spider-Man and many other Marvel heroes began their career at the time they were first published in comics, and are unaffected by the Sliding Timescale. Additionally, one of the major divergent events in this world is Tony Stark's decision to be more involved with the Vietnam War as Iron Man,[2] which escalated tensions between the United States and the Soviet Union and led not only to an extended Vietnam War, but a World War III-esque conflict known as "The Russian War" that began in 1984 when nuclear missiles destroyed the town of Allentown, Pennsylvania while many United States-based superheroes disappeared to Battleworld during "Secret Wars".[3] The Russian War was won by the United States at some undetermined time before 1995.[4] Following the events of September 11th, 2001, Tony Stark would rise to power, becoming the Secretary of Defense and enacting the Superhuman Registration Act.[5] This would create a rift among superheroes, which would allow Doctor Doom to take over the planet. Doom's technologies were seemingly destroyed in 2019 thanks to the sacrifice of a 72-year-old Peter Parker and the Venom Symbiote.[6]

U.S.Avengers
Add a photo to this gallery

Venom Symbiote
Add a photo to this gallery

Like this? Let us know!
Retrieved from "https://marvel.fandom.com/wiki/Earth-19529?oldid=6449078"
Community content is available under CC-BY-SA unless otherwise noted.