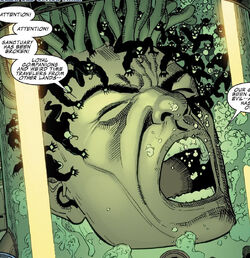 One of the realities experienced by the members of Fantastic Four of Earth-616. Space time collapsed again and transported Chamberlain Grimm, Pirate Captain Storm, Black Susan and their WWII equivalents from Earth-60907, to Earth-19936. This was a world where Reed Richards was the Supreme Intelligence and was being overun by symbiote-possessed Skrulls. Reed seemingly could tell the visitors were reality-displaced., but was overun and killed. While the Bens and Johnnys were seemingly killed the Susans were holding out, the viewer was then switched off and the Fantastic Four of Earth-616 returned home.[1]

Like this? Let us know!
Retrieved from "https://marvel.fandom.com/wiki/Earth-19936?oldid=6524621"
Community content is available under CC-BY-SA unless otherwise noted.