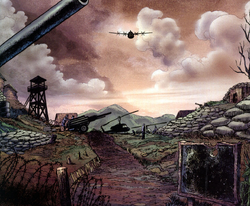 In a violent world without superheroes, Frank Castle sought to punish criminals by any means necessary as revenge for the murder of his family, and Nick Fury battled against Hydra in the Cold War.[1]

When Earth-200111 was destroyed by an incursion, God Emperor Doom salvaged its remnants and turned them into the Far East domain of his patchwork planet Battleworld.[2]

Like this? Let us know!
Retrieved from "https://marvel.fandom.com/wiki/Earth-200111?oldid=5584056"
Community content is available under CC-BY-SA unless otherwise noted.