What If...
Norman Osborn Won The Siege of Asgard? 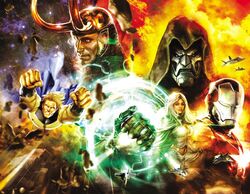 This reality was very similar to Earth-616, except that in this universe, the Watcher was named Atau instead of Uatu.

Until the run-up to the Siege of Asgard, Ares, distrustful of Norman Osborn, tried to kill him, but was murdered by the Sentry.

As a result, the Sentry's power was not exhausted during the Siege, and he and his criminal allies were able to kill the Asgardians and all of the remaining superheroes. Even when the battle was joined by X-Force and the Fantastic Four, the criminals still won the day.

This was bad news to Loki, who was horrified by how the day had deviated from his plans. Forming an alliance between the renegade members of Norman Osborn's villain Cabal - himself, Doctor Doom and Emma Frost - he teleported into Utopia. Osborn had a falling out with the President of the United Sates over his conduct, and had sent some of his Avengers to kill the President. The renegade Cabal found Bullseye and Sentry, and revealed to him the truth that Bullseye had killed Lindy Reynolds on Osborn's orders, to turn the Sentry into a weapon. Sentry responded to this by fully and finally surrendering to his Dark Void identity, and murdering everyone in the room.

The Void found the remaining members of the Cabal - Taskmaster, Osborn and the Hood - and killed them. He subsequently destroyed all life on Earth, ploughing through men and machines, heroes, villains and citizens.

When he was done with the Earth, he destroyed the Moon, and its only occupant, Atau, the Watcher, and continued so throughout the universe.

Like this? Let us know!
Retrieved from "https://marvel.fandom.com/wiki/Earth-21119?oldid=6494475"
Community content is available under CC-BY-SA unless otherwise noted.