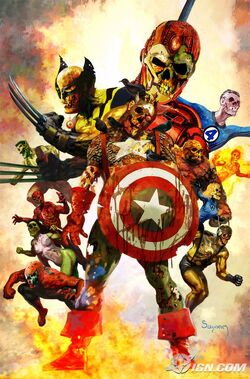 They said it all started with a flash in the sky and a ripple through the clouds. Nobody knows what caused this exactly, but some people think it might be a punch. Was he really that strong? Had the infection made him so determined to get here in search of a brand new food supply? At the time I said no... but having experienced this hunger firsthand I'm afraid that I now know better. The Avengers were the first on the scene. Can you picture them? Faces grave, concerned for all those human casualties. That idiot Colonel America reassuring everyone that everything would be fine now that the super heroes have arrived. What they didn't know is that the infection had targeted the super heroes of this dimension and a thousand realities before us. This was how it consumed, you see... by infecting super heroes just like him and sending them out to infect the others. Within twenty-four hours, we'd consumed the entire planet. One super hero from an infected universe... That was all it took to end an entire world.

Earth-2149 was largely identical to that of the main Marvel reality, Earth-616, with only a few minor differences and some major differences. For example, the Captain America of this Earth was 3 ranks ahead of his 616 counterpart and was known as Colonel America. He was also at one point President of the United States, though he never served a full term. Some characters, such as Luke Cage and Falcon retained older versions of their costumes and as evidenced by the appearances of Venom, Dark Phoenix, Scarlet Spider and the Winter Soldier events such as the first Secret Wars, the Dark Phoenix Saga, the Clone Saga and Bucky turning into the Winter Soldier still happened, Black Cat also had a twin sister known as Night Cat and the Vulture seemed to have been a superhero rather than a villain given his allegiance to the zombified heroes. For major differences, it also appears that this Earth had not yet been visited by Galactus and the Silver Surfer before and thus the Galactus Trilogy didn't occur either, since the Marvel Zombies show no familiarity with them and based on Thanos appearing as one of the infected in the 40 years later time jump the Infinity Gauntlet never came to be.[2][3] Given the roles that Galactus and Silver Surfer played in events native to Earth-616, it might mean that Earth-2149's interaction with cosmic and alien beings was very limited until the outbreak.[4]

Beginning of the Infection

This reality continued on in this way, until it was ravaged when a version of the Sentry of yet another alternate universe, (who was sent here by his native Watchher to create a temporal loop and prevent the infection from spreading to alternate realities)[5] bringing with him a disease that turned individuals into flesh-eating zombies. The Avengers were the first on the scene after Sentry crashed in the middle of Manhattan, and all were quickly killed or infected. The disease soon spread throughout the superhuman community, with the super powered undead feasting on the non-powered population. With most of the human life of this Earth extinguished, the super-zombies wandered the world, tormented by hunger with nothing to eat.[4]

The Coming of Galactus

When Magneto, one of the last uninfected villains/heroes was eaten, the Heralds of Galactus arrived to announce the coming of Galactus. Many zombies tried to eat Silver Surfer, but only Hulk, Wolverine, Spider-Man, Iron Man, Giant-Man, Power-Man and Captain America did so. The Zombie Galacti absorbed his powers, so they used it to toast the other zombies and eat them, hoping they would taste better like this but they tasted bad anyway.

After Galactus arrived, the zombies tried to eat him to, but he was too powerful. They used Vibranium to create a machine that united their Power Cosmic to take him down. But after doing so, their zombie villains used the opportunity to try to eat him has well, so before the Zombie Galacti eat Galactus they faced their old enemies one last time, killing them. An angry Galactus tried to get up and kill the Zombie Galacti, but they devoured him quickly. They absorbed his powers, and used it to travel through space and consume other life forms.[6] During this time, some remaining zombies on Earth tried to reach the mainstream reality, but their plans failed - their last fate is unknown.[7]

After forty years consuming planets, at the edge of the known universe, the zombie galacti realized that practically all the life in the universe was gone, so they decided to return to Earth to repair an old Dimensional Travel Machine Reed had before to consume other dimensions. By this point, Phoenix, Firelord and Gladiator had joined the Zombie Galacti; Thanos joined them as well, but was killed by the Hulk after he accused the green monster of being as responsible as the other zombies for the extinction of life in that universe for eating more then the rest of them. After arriving in earth, they encountered a group of survivors led by a zombified Black Panther, who survived with the severed heads of Wasp and Hawkeye in robot bodies along with the Acolytes.

The Hulk tried to eat them, but was stopped by Giant-Man who suggested creating some sort of breeding project to produce more "food", but Spider-Man was against the idea and attacked Hank, who demanded someone to kill Spider-Man. Wolverine tried to do it but Power-Man stopped him, then Wasp, Hawkeye and T'Challa helped them fight the "bad" zombies while the group of humans hid.

A forcefield was activated and separated the good zombies and humans from the bad ones, this made the Hulk lose consciousness and revert into Bruce Banner, cut Power-Man in half and trapped Gladiator inside resulting in his death. Having no remaining way to prey on the survivors, the "bad" zombies decided to return their attention to the Dimensional Travel Machine at the Baxter Building.

In there, they discovered that the Dimensional Travel Machine was actually in the survivor's camp, so they returned to New Wakanda, where Wasp, Spider-Man, Hawkeye, Power-Man and Black Panther offered to give up the machine if the "bad" zombies left them, and the humans, alone. Deception and another battle ensued. Banner gained consciousness and tried to eat Reynolds in a security room from which he was watching the battle, which also contained the lever that activated/deactivated the force field. In his panic, he accidentally disabled the force field, so the "bad" zombies concluded that they would not only steal the machine, but eat the humans as well, but their hunger for flesh left before they could do it. Banner turned into Hulk and started eating again. All the various zombies tried to stop him, but Iron Man, Phoenix, Firelord and Hawkeye were killed.

Reynolds offered to let the Hulk eat him if he would spare the others, having lost his lover the Wasp in the previous battle with Ant-Man. After eating Reynolds, Hulk changed back into Banner and let himself be killed by the remaining zombies, before he could become the Hulk again. Weeks later, Malcom Cortez decided he liked his life style and didn't want the zombies around, so he tricked them, sending all of the remaining zombies to Earth-91126.[8]

The Zombies traveled to Earth-91126 where they infected that reality and ultimately lead to the Watcher of that reality sending the Sentry back to Earth-2149 starting the infection on this reality.[5]

Like this? Let us know!
Retrieved from "https://marvel.fandom.com/wiki/Earth-2149?oldid=6555736"
Community content is available under CC-BY-SA unless otherwise noted.