Marvel vs. Capcom (マーヴルVSカプコン, Māvuru tai Kapukon) is a series of fighting games created by Capcom in which characters created by Marvel Comics and Capcom's own characters appear together.

Games in the Series 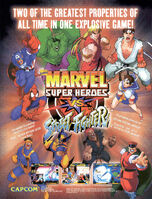 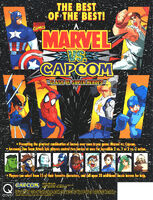 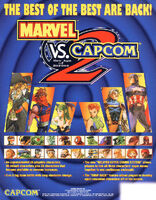 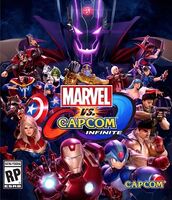 Marvel vs. Capcom: Infinite
Add a photo to this gallery

The Marvel characters depicted in these games were often based on their incarnations in various early 1990s animated series (particularly X-Men), and were often voiced by the same voice actors.

Many of the characters and fighting mechanics used in these games were first developed and refined in two other fighting games Capcom had developed earlier, serving as precursors to the series: X-Men: Children of the Atom, which featured characters strictly from the X-Men universe, and Marvel Super Heroes, which gleaned characters from Marvel's entire roster (X-Men included).

Although the tag-team fighting concept was not new, it was refined with this series (although fans would argue whether this was for better or for worse). New fighting game terminology, such as "Aerial Rave" (the act of performing a combo on an opponent while the opponent remains airborne) and "Variable Combination" (the act of having two or more characters on the same team to perform their hyper combos at the same time) were added to the fighting game vernacular with this series.

There does not appear to be a concrete story behind each game in the series, although several plot points run across the various games of the series. However, various pairs of characters - typically one Marvel and one Capcom, were often partnered with each other during gameplay (although later games randomized the partnerships so that it was possible to complete the game facing all-Marvel or all-Capcom teams).

However, several interesting (but noncanonical to both Marvel and Capcom continuities) sideplots did emerge throughout the series, some of which contradict the others:

Marvel vs. Capcom 2 and Marvel vs. Capcom 3 were the first to offer an overarching plot for their respective games. In the former, pirate Ruby Heart summons heroes from both universes to stop the advance of the multiversal destructive force, Abyss; in the latter, Doctor Doom finds the universe where the Capcom characters live and forges an alliance with Resident Evil antagonist Albert Wesker so they can rule both universes. This, however, ends up attracting the ire of Galactus, who aims to consome both Earths, and the heroes must work together to stop the villains and stave off the Devourer of Worlds. Like in the previous games, Marvel vs. Capcom 3 (and its update, Ultimate) also offered possible sideplots involving characters from both IPs upon completion of the game with certain characters:

Retrieved from "https://marvel.fandom.com/wiki/Marvel_vs._Capcom_(Series)?oldid=5497051"
Community content is available under CC-BY-SA unless otherwise noted.