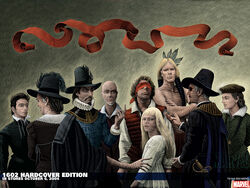 Everything has its season. In spring, the world brings forth blossoms. In cherry season, you get cherries. But a season has dawned three hundred years early: a season of heroes and marvels. My own conclusion -- several of my colleagues laugh at me -- is that the two are connected. That the universe fights to save itself. To save everything, the heroes have come.

The origins of the 1602 universe (Earth-311) actually began in an alternate future reality designated Earth-460. The Earth-460 version of Purple Man had become President-For-Life, and many of Earth's other heroes had either died from old age or been hunted down and killed. Only Captain America remained to fight for democracy, but he too was betrayed and captured. Not wanting to leave any remains that could serve as a rallying point for rebellion, the Purple Man instead had him sent into the past of Earth-616.

Captain America found himself in America shortly before the Europeans founded the Roanoke colony.[1] For reasons unknown, the Captain's arrival caused the early creation of other heroes and villains and the subsequent destabilization of reality. Eventually, the destabilization was fixed by Captain America's return to his own timeline, and the alternate history he unwittingly created was separated from Earth-616 and preserved as a new dimension, called Earth-311.

Following the split, Earth-311 was kept within a jewel by Uatu the Watcher.

The world of Earth-311 is much as it was in the year 1602 on Earth-616. Political powers include England, Scotland, the Catholic Church centered on Rome, and Latveria. Latveria was ruled by Count Otto von Doom, who was called "the Handsome" and intended to rule the world. England was ruled at first by Elizabeth I, and later by James VI of Scotland following Elizabeth's assassination by Doom's minions (a year earlier than her death in the real world). The Roanoke Colony in America also declared its independence from Britain after many super-powered individuals fled persecution under James I.

Mutants exist, but they are most commonly referred to as the "witchbreed" (also called "mutantur", Latin for "changing ones"). The Catholic Church, as well as devout Protestants such as James VI, considered the witchbreed to be devil-worshipers and hunted them down. The Inquisitor Enrique, himself a witchbreed, allowed witchbreed to survive if they could pass as human so that they could eventually join his "Brotherhood of Those Who Will Inherit The Earth". Elizabeth I also allowed witchbreed to live in England, where they were taught at Carlos Javier's Select School for Sons of Gentlefolk. James VI's first act after Elizabeth's death was to round up and imprison all of Javier's students, forcing them to escape to America.

Also notable is the continued existence of dinosaurs, which are variously referred to as "leather wings" and "thunder lizards" depending on their species. These dinosaurs exist throughout Earth-311 (for example, in Latveria where they are the size of small birds and in Carlos Javier's school, kept as pets), but most prominently in the so-called New World, where many larger specimens were located. The reason for these creatures' existence is unclear.

Earth-311 was once beset by bizarre weather, including lightning storms without rain and blood red skies. Earthquakes, floods, rains of lizards, and other natural disasters were also reported. These phenomena were caused by the destabilization of reality (in turn caused by Captain America's presence in the time line), and ended once Earth-311 was separated from Earth-616.

By the 1940s, Earth-311 had its own native version of Captain America.

The remnants of this reality, which perished due to the incursions, were salvaged by God Emperor Doom, and were made part of his Battleworld as the domain known as King James' England.[2]

Like this? Let us know!
Retrieved from "https://marvel.fandom.com/wiki/Earth-311?oldid=5858986"
Community content is available under CC-BY-SA unless otherwise noted.