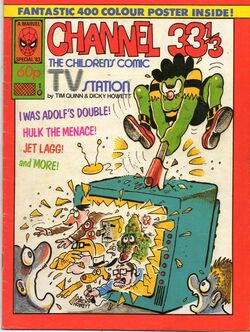 Earth 33⅓ ('Thirty Three and a Third') was created by cartoonists Tim Quinn and Dicky Howett for Marvel UK in the early 1980's. It was the world on which were nominally based all the characters featured in the various short humor strips (many of them only three panels) which ran on the letters pages or editorial pages of various British weekly titles such as Spider-Man and Future Tense, and also certain monthly magazines such as Doctor Who. The most successful of these strips, the spoof strip Doctor Who? (a parody of Doctor Who mostly published in Doctor Who Magazine lasted well over a decade. The longest running single storyline was 'I Was Adolf's Double', concerning a gardener (Winston S. Quaill) who looked exactly like Adolf Hitler.

Like this? Let us know!
Retrieved from "https://marvel.fandom.com/wiki/Earth-333333333?oldid=6004026"
Community content is available under CC-BY-SA unless otherwise noted.