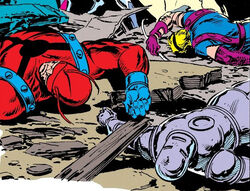 A reality where the Avengers were all killed in the rampage of an insane Sersi, with the exception of T'Challa, the Coal Tiger, who was gravely wounded but clung to life. He was discovered by the Gatherers, who had been sent to this reality to recruit him to their team. Despite his injuries, the Coal Tiger attacked the newcomers, although he was easily subdued by the Gatherer Sloth, who knocked him unconscious before transporting him to Earth-616.

Like this? Let us know!
Retrieved from "https://marvel.fandom.com/wiki/Earth-355?oldid=5637875"
Community content is available under CC-BY-SA unless otherwise noted.