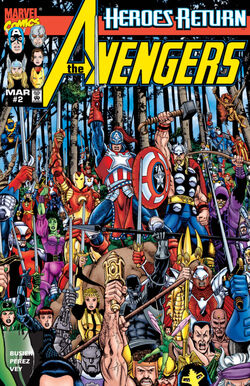 Earth-398 was a reality warp created by Morgan Le Fay. The warp changed the time period to a medieval setting altering the Avengers clothing, speech patterns, and thought processes. All of the Avengers involved believed themselves to be a part of the Queen’s elite guard known as the Queen's Vengeance.[1]

In 1998, the civilized world was ruled from Tintagel Head, off the coast of Cornwall, from which Queen Morgan the First oversaw the lands and dominion, issuing decrees and meting out justice. The queen was loved by the citizenry and those who didn't died in the dungeons.

The Queen's Vengeance, the Queen's elite guard, were deployed against the Picts in the north but were unable to stand against them. When they struck, they do so without hesitation and show no mercy. The Queen's subjects have pride in the Queen's Vengeance and yet feared them also. Morgan allowed the Pictish rebellion to occur for her entertainment. She also permitted the existence of other powers on Earth for her amusement, including Mandarin China and the Empire of Deviant Lemuria. In this reality, all mystic power was reserved for Morgan.

The Scarlet Witch who was imprisoned in the dungeons and fully aware of what had happened, reached out to anyone who could hear her thoughts. This resulted in Thor (Donar) having doubts which he presented to his queen, and then left to go to Asgard to find the answers. Captain America (Yeoman America) was the first to realize the truth and convinced five other heroes to remember their past. Most of them didn't though and battled the six until Thor arrived. He remembered and helped them escape. Meanwhile, Wonder Man was restored to life in the dungeons and freed the Scarlet Witch.

The seven rebels meanwhile were hiding out in the forests and training. Learning that Wanda had escaped, they attempted to sneak into the castle to steal the Twilight Sword. Waiting for them were the rest of the Queen's Vengeance and were forced to do battle, outnumbered 4-to-1. Morgan appeared in a giant form, taunting the Avengers. Wanda then appeared, the only other person in the world with mystic power, and battled Morgan. Wonder Man then appeared in a giant form, aiding Wanda in her battle. Forcing Morgan to focus on the two, weakening her hold on the Queen's Vengeance. They soon all remembered and gave Wanda their strength. During the fighting Vision was crippled and Wonder Man disintegrated, but Morgan was defeated and reality restored.[2]

Like this? Let us know!
Retrieved from "https://marvel.fandom.com/wiki/Earth-398?oldid=6079949"
Community content is available under CC-BY-SA unless otherwise noted.